Rangoli: Art that Binds is funded by Wales Arts International, British Council Wales, First Campus and Fflim Cymru Wales as part of India Wales, a major season of artistic collaboration between the two countries to mark the UK-India Year of Culture.  The project has been developed by Amy Morris for Winding Snake.

Winding Snake Productions, supported by First Campus, are running one day art projects at USW City Campus Newport and at the ATRiuM Cardiff Campus. During the first day at City Campus participants will learn about the history and cultural origins of Rangoli and will all work together to make a giant Rangoli. Participants will have the opportunity to experience a University campus and interact with undergraduate students. At the second event participants will create a final piece of Rangoli art and the day will finish with Amy from Winding Snake Productions talking about the entire project and the screening of the film premiere Rangoli: Art that Binds.

Rangoli is an ancient art form traditionally practised by women in India. Typically, patterns are created on the floor using coloured sand, rice or flowers and are thought to bring good luck. Rangoli are made for Hindu festivals and other special events and the colourful designs represent life, folklore and culture. Different techniques and materials are used to create Rangoli and are specific to regions. Designs are passed down generation to generation, continuing the tradition across the ages.

“Thank you to everyone who organised the event, Cadi had a brilliant day and was amazed by the university. It is where she wants to go when she is older as Art is what she enjoys the most. Thank you all again.”  Nicola

Check out the time lapse video and the slideshow showing the creation of the Rangoli art at USW City Campus, Newport. 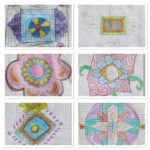